How to flock a Christmas tree DIY (the right way!) 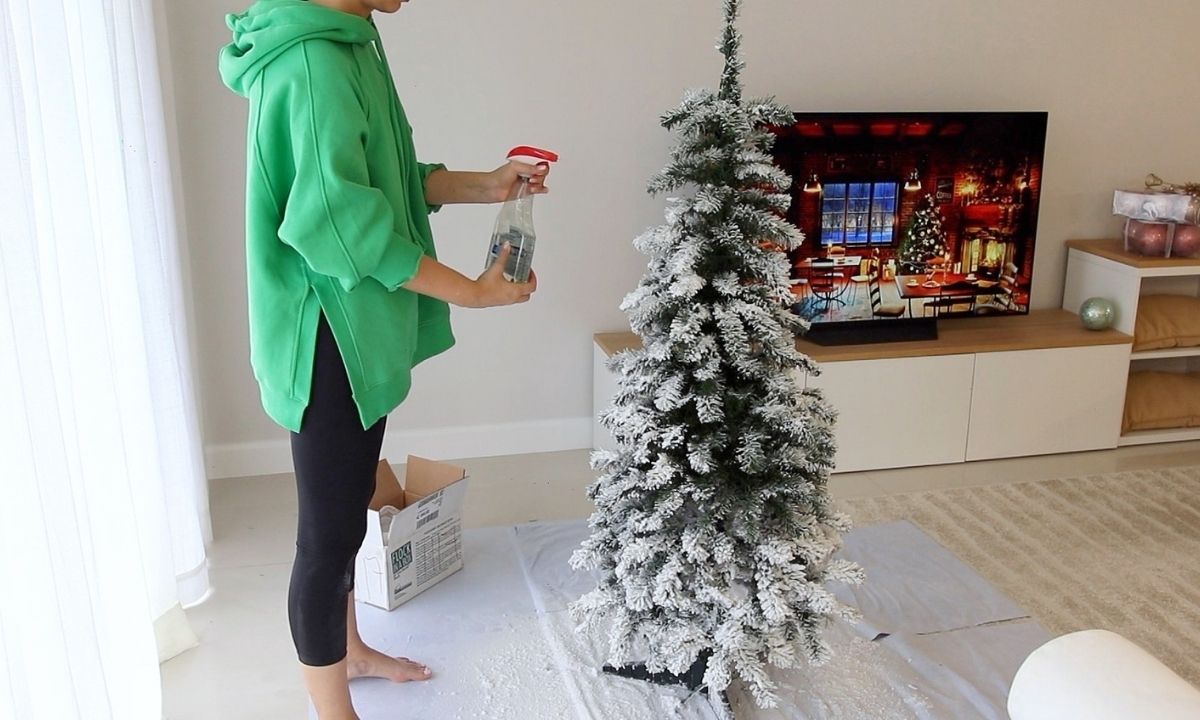 How to flock a Christmas tree DIY

I’ve always loved flocked Christmas trees and wanted one for myself. So, a few years ago, I tried to flock my 7.5 ft Christmas tree using a regular snow spray. To be honest, I didn’t like the result at all.

Can you use spray snow to flock a Christmas tree?

Snow spray is not the best option for flocking a Christmas tree. Because it’s just a spray, it has no volume or texture and basically just paints the branches white. Most snow sprays remain a powdery sticky layer on the surface, so it will smudge later, get your hands and other things dirty. I don’t recommend using snow spray to flock a large Christmas tree.

Basically, the snow spray just paints the branches white. It obviously doesn’t have the volume or realistic texture of the snow (at least the spray I used doesn’t).

But that’s not what I disliked the most. The spray doesn’t set well, it leaves a powdery, kind of sticky layer on the surface that smudges easily when you touch it.

So after the holidays, when I packed the tree back into the box, all this “snow” was smeared on the branches and on my hands.

And the next year, when I took out the tree again, this “snow” already looked like dirt on the tree, not appealing at all. So I ended up selling this tree out.

I think these snow sprays are good for small diys where you only need a touch of snow. But if you want to flock a large Christmas tree, it’s better to use an alternative way or just leave the tree green and not spoil it.

What is the best way to flock a Christmas tree?

The best way to flock a Christmas tree is to use a special flocking powder, as it has the volume and texture of real snow once applied to the branches. Flocking powder hardens firmly and sticks to branches very well.

So this year I challenged myself with a new DIY project – to turn my very old 5ft Christmas tree that has been gathering dust in my closet for years into a modern and glamorous one!

The idea of diy flocking came up again. But this time I decided to do everything right.

And finally I got what I wanted – a fluffy, heavily flocked tree like from a store!
So I want to share with you the whole process and all the details here.

How to flock a Christmas tree DIY

If you have the opportunity, it’s certainly better to take the tree outside, just make sure you’re not doing it on a windy day.

I didn’t have that option because I live in an apartment building so I had to do it inside.

To securely protect my floor and rug I covered them with a special leakproof sticky surface protection fabric called Katch. And looking ahead, I can say that I really liked it because nothing leaked anywhere, it was very easy to use and just minimized my clean-up process. 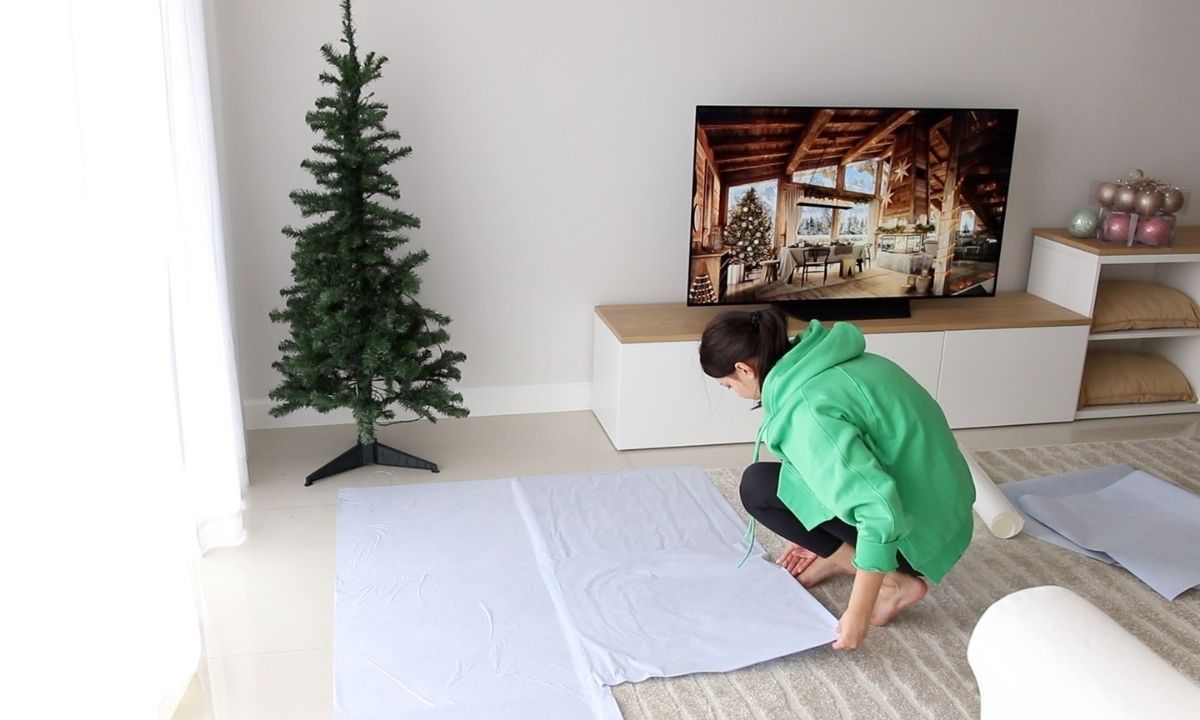 If you’re doing this outdoors, think about how to protect the ground as well, because it won’t be easy to clean-up and remove all the mess afterwards.

Before flocking a tree, it’s necessary to fluff up all the branches.

As you can see, my tree is not the best quality tree, not to say the least. It’s very poor with branches, so I needed to fluff it up as much as I could. 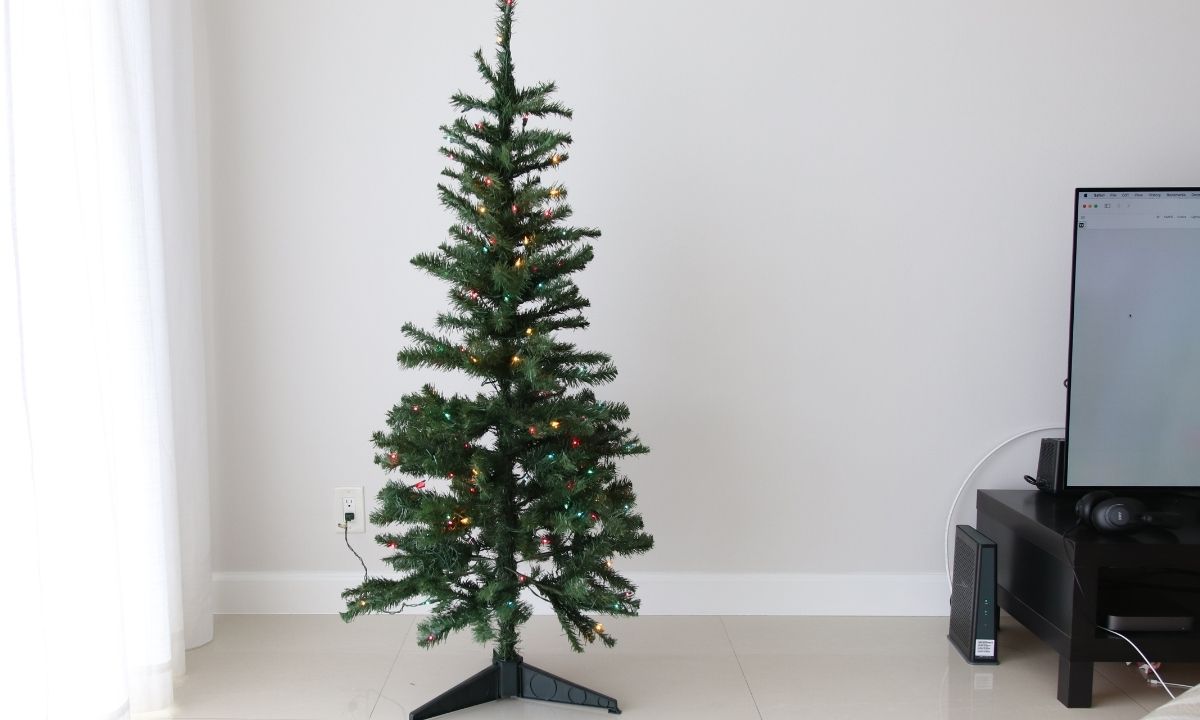 Fluffing branches is best done by sections, so to begin with, I meticulously fluffed all the branches of the first section. 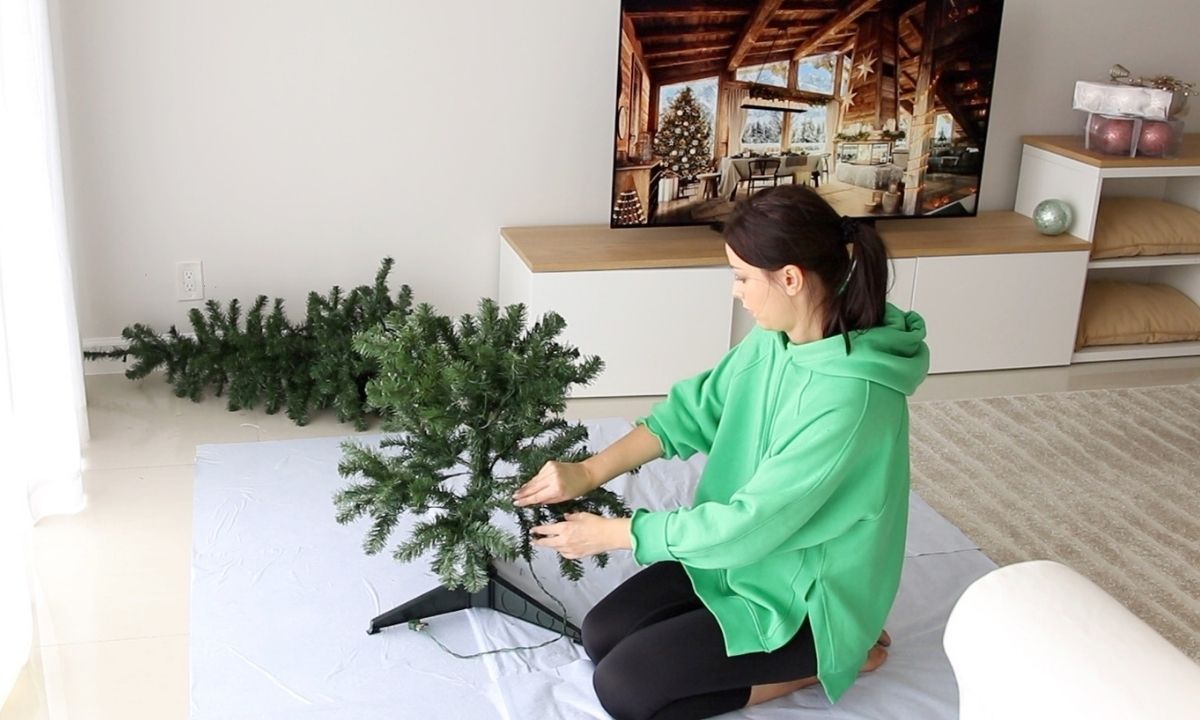 Also I really like when the branches are slightly bent down. Because when a tree is flocked, it has a very realistic look, as if the snow is weighing down the tree’s branches.

So I tried to give this shape to my branches as well.

I was using this product called Flock In A Box.

I know that the most popular flock that I’ve heard a lot about is called SnoFlock, but it was out of stock at the time I needed it. So I ordered this Flock In A Box to try because it also had very good reviews on Amazon.

And in general, I’m almost sure that all these flock powders are not much different from each other and are made from the same ingredients.

The adhesive mechanism is activated by water, so before application you need to spray everything with warm water, and then also spray it well on top so that the flock powder is in good contact with water everywhere. 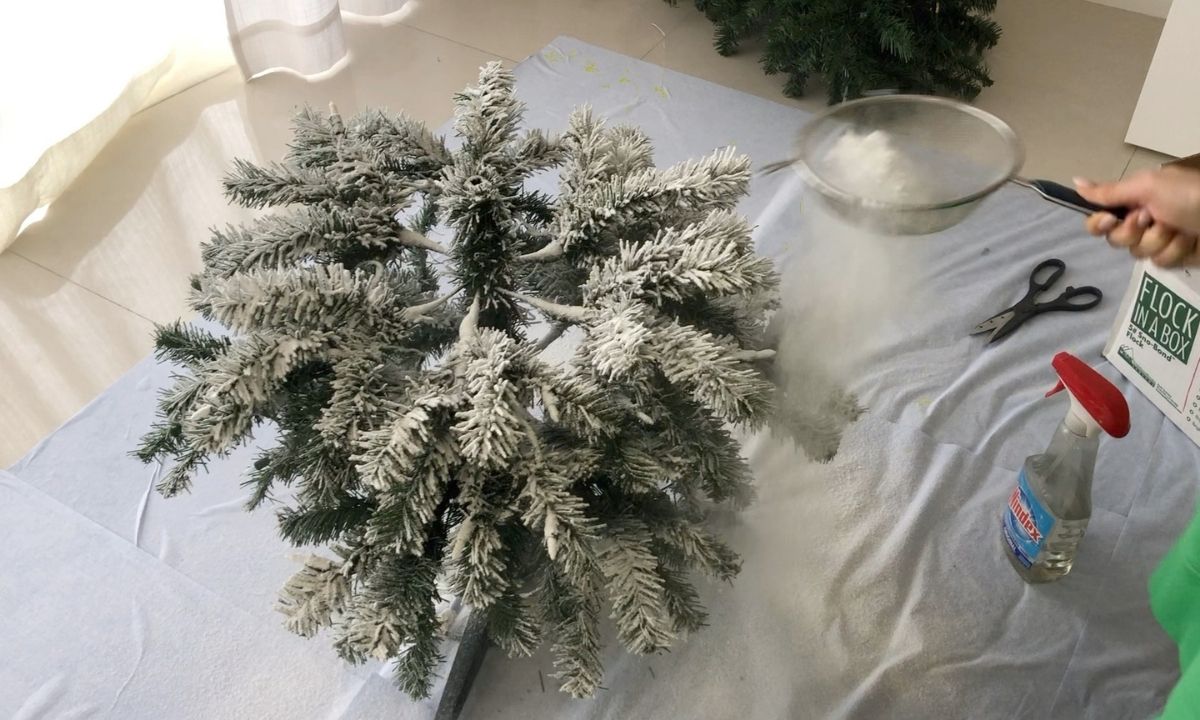 I personally wanted to flock my tree pretty heavily, so I did layers, and I also worked in the depths of the branches and the trunk. 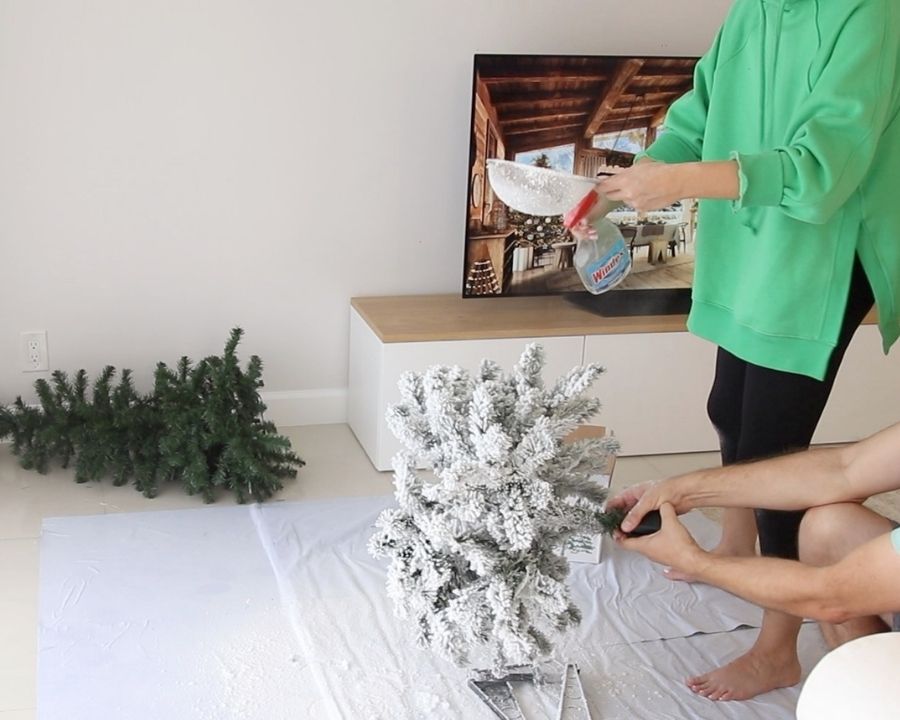 I wanted the snow to be all over the tree (not only outside, but also inside), so I rotated my tree in all directions, trying to put the flock everywhere.

If you want to do the same heavy flock on a large tree, it will be hard to flock it inside, but I think it is possible, if someone will help you, and if you work by sections like me. 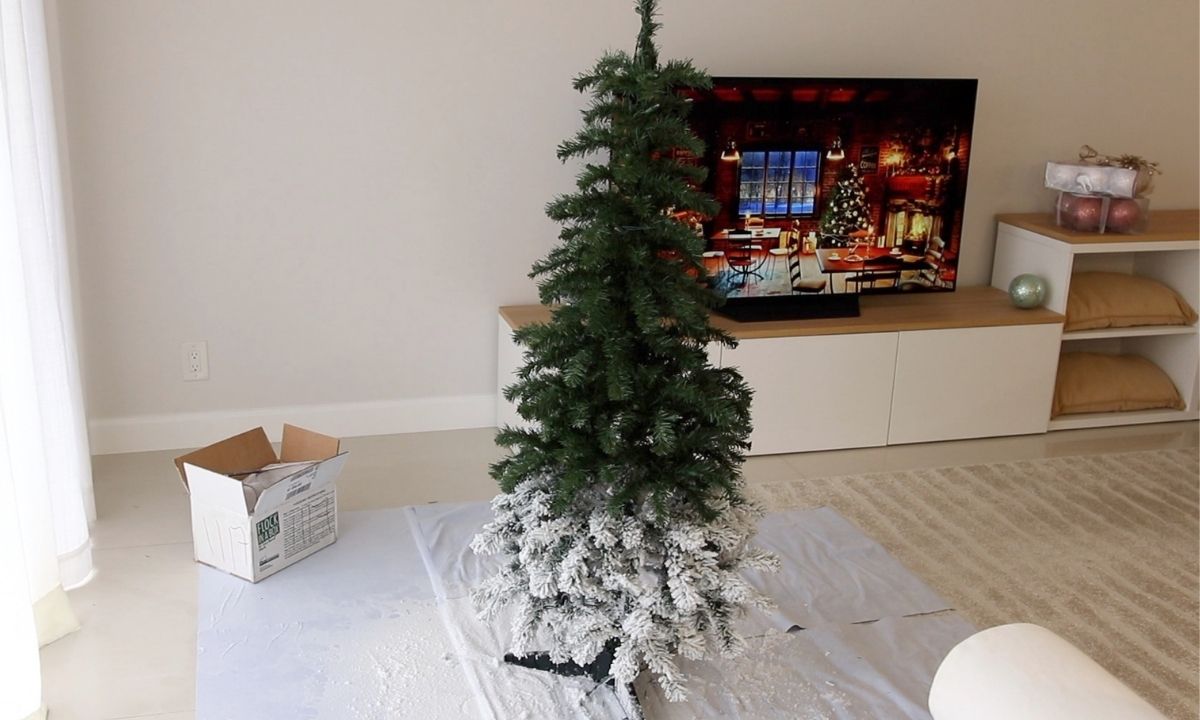 Once I was done, I gave the whole tree another final mist to seal everything and let it dry for 24 hours.

Yes, it’s very messy and time consuming, but the finished look is so worth it! 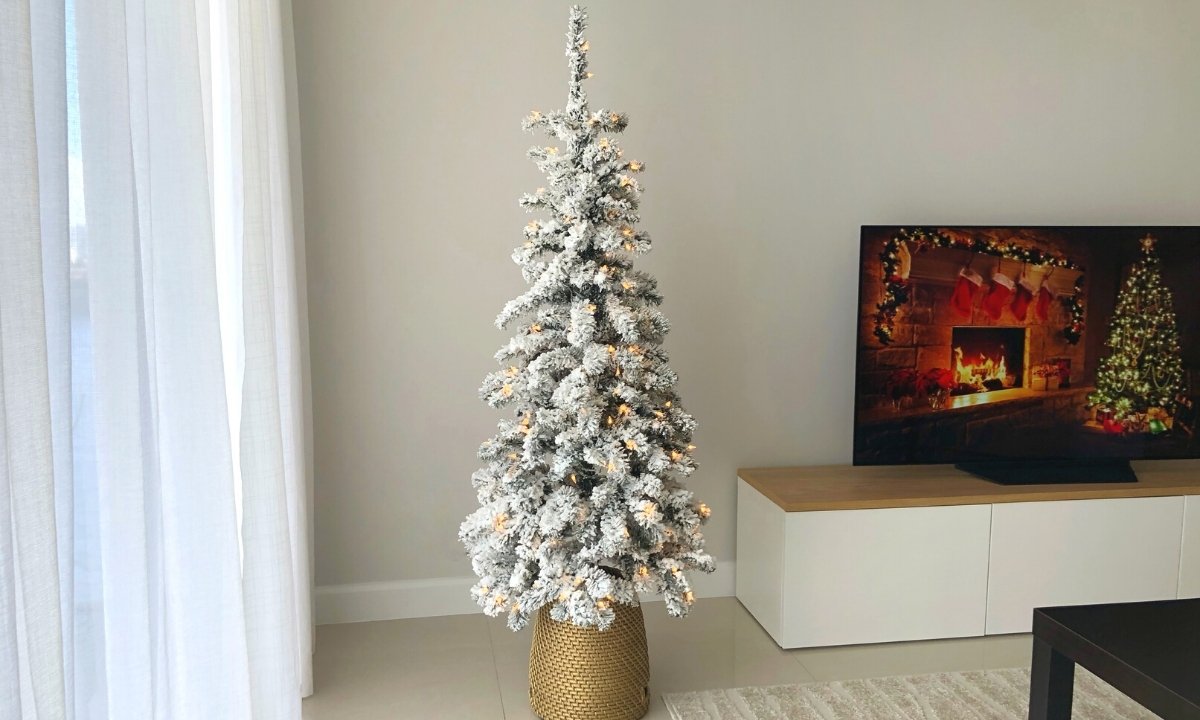 I’m very pleased with the quality of this flocking powder, it hardens firmly and sticks to the branches very well. Of course, sometimes it will come off here and there, but honestly, I think that no more than on store-bought trees. 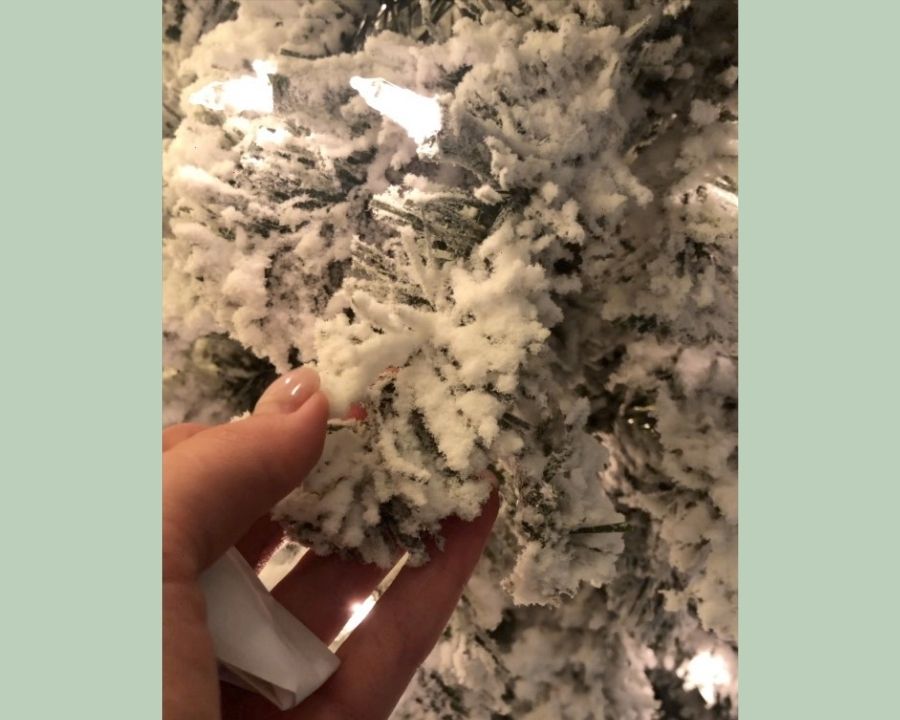 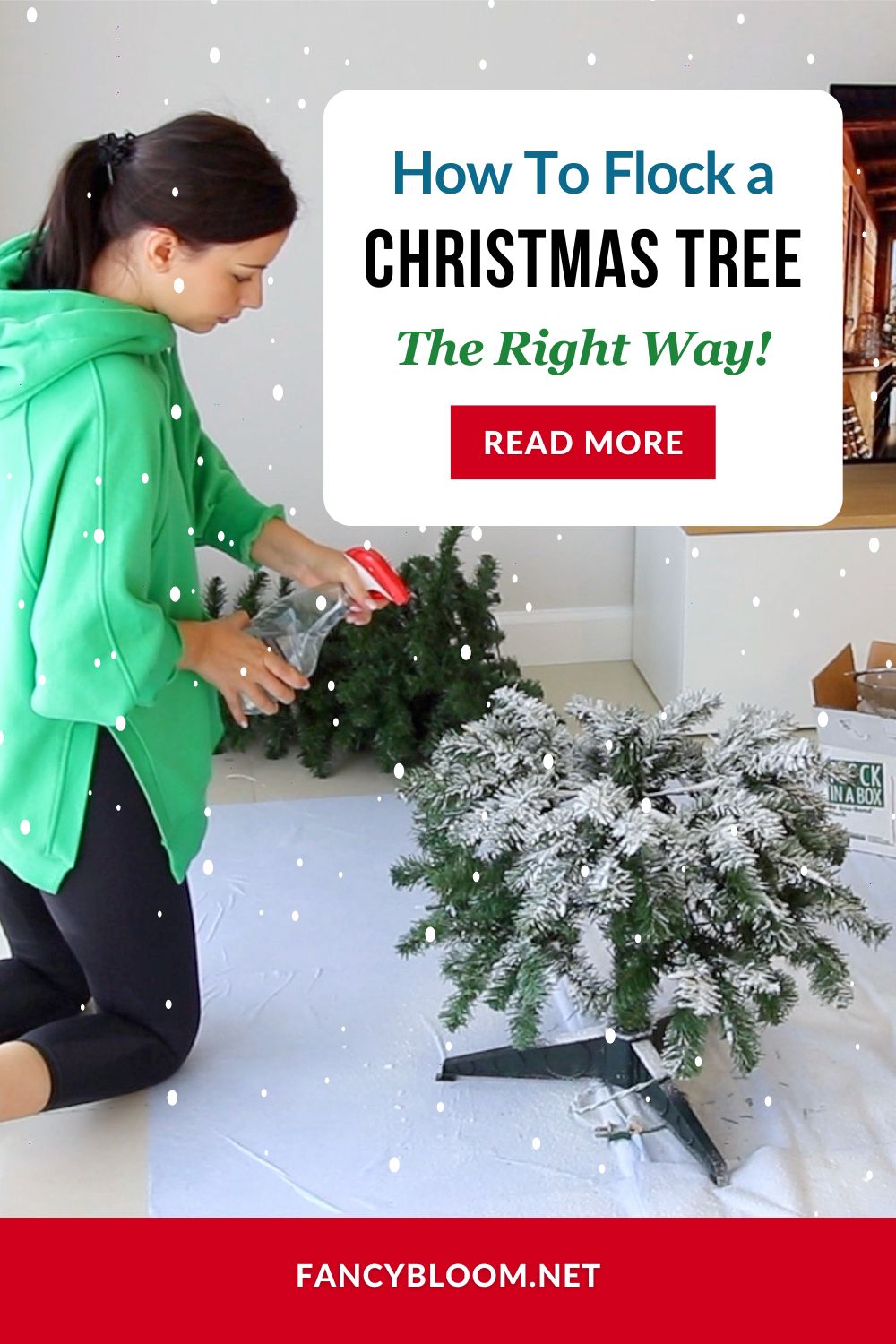 Please be aware that if you heavily flock your tree, it will become much more voluminous and will most likely not fit in its original box. So think in advance how you will store your tree after.

Be sure to see how I transformed this Christmas tree further and how I decorated it with all the details. Continue here. 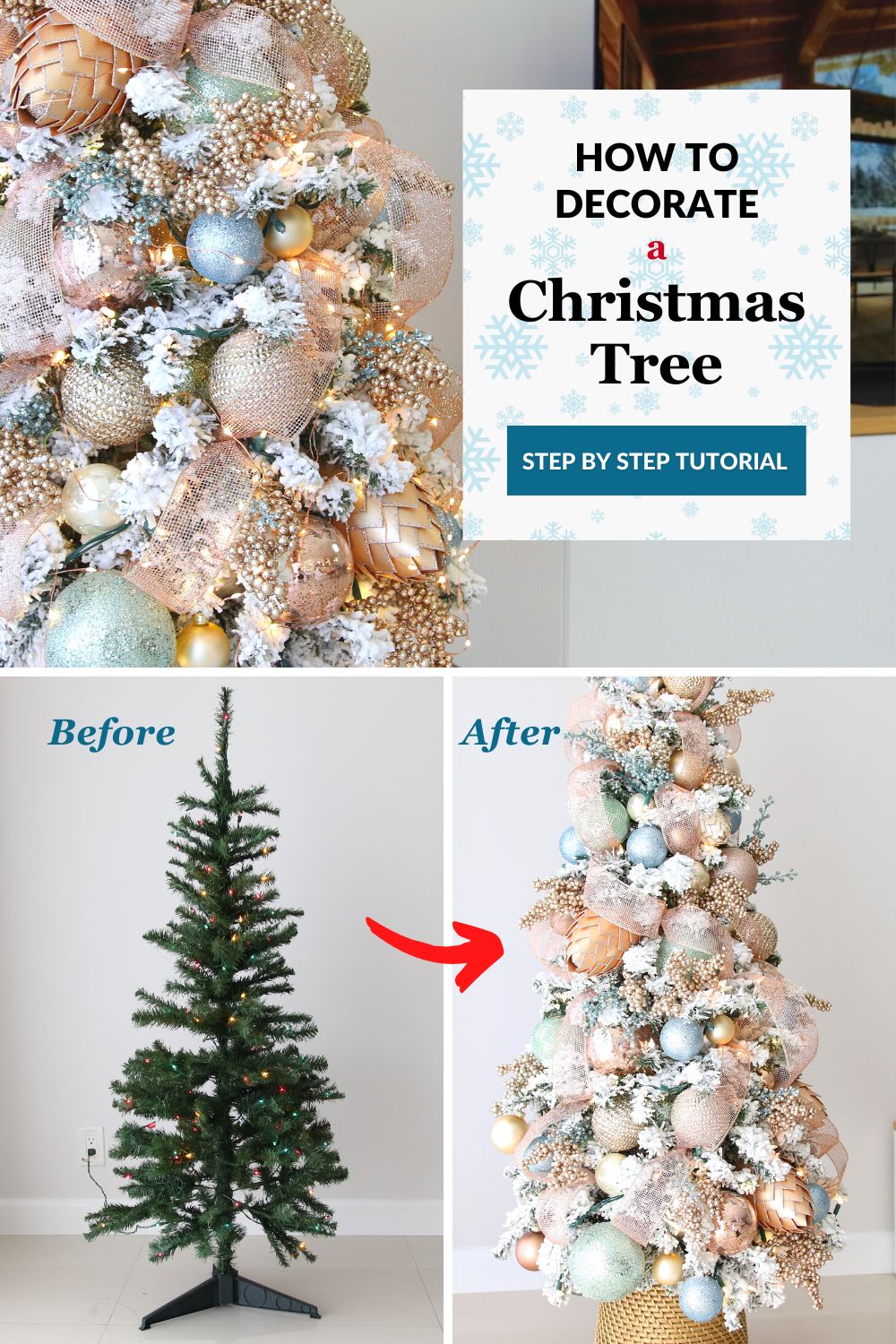 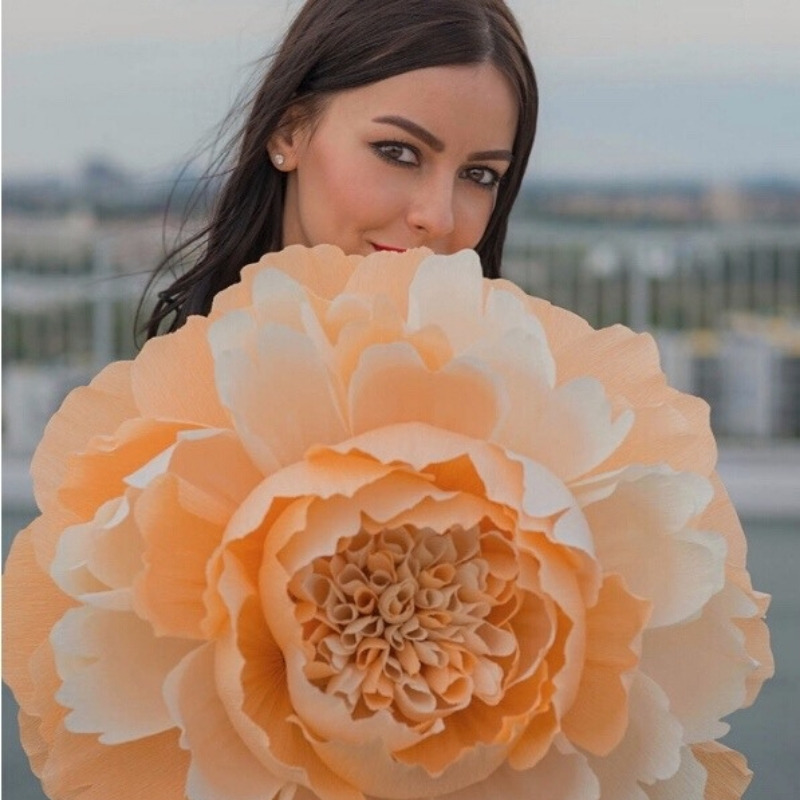 Hello and welcome to FancyBloom!

I’m Oksana and I love paper flowers and all things paper. Here at FancyBloom I design new flower templates, make paper flower tutorials, and share my ideas and inspiration for fancy and modern craft. 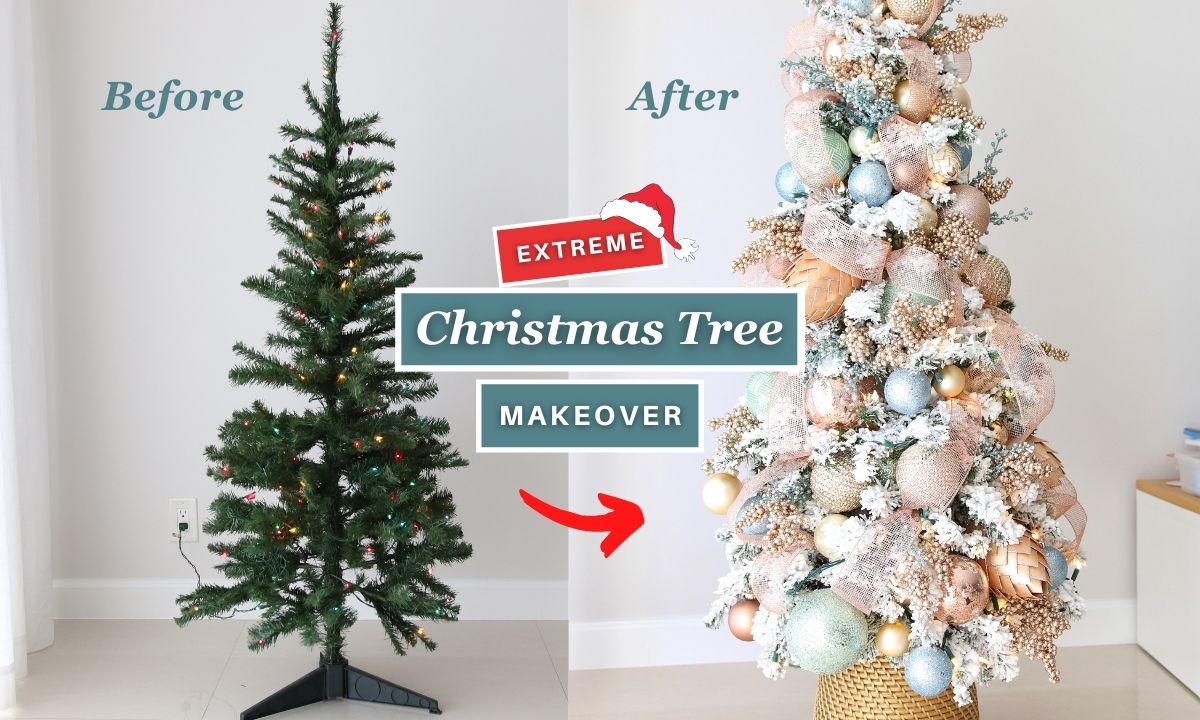 How To Make A Cheap Christmas Tree Look Expensive – FancyBloom 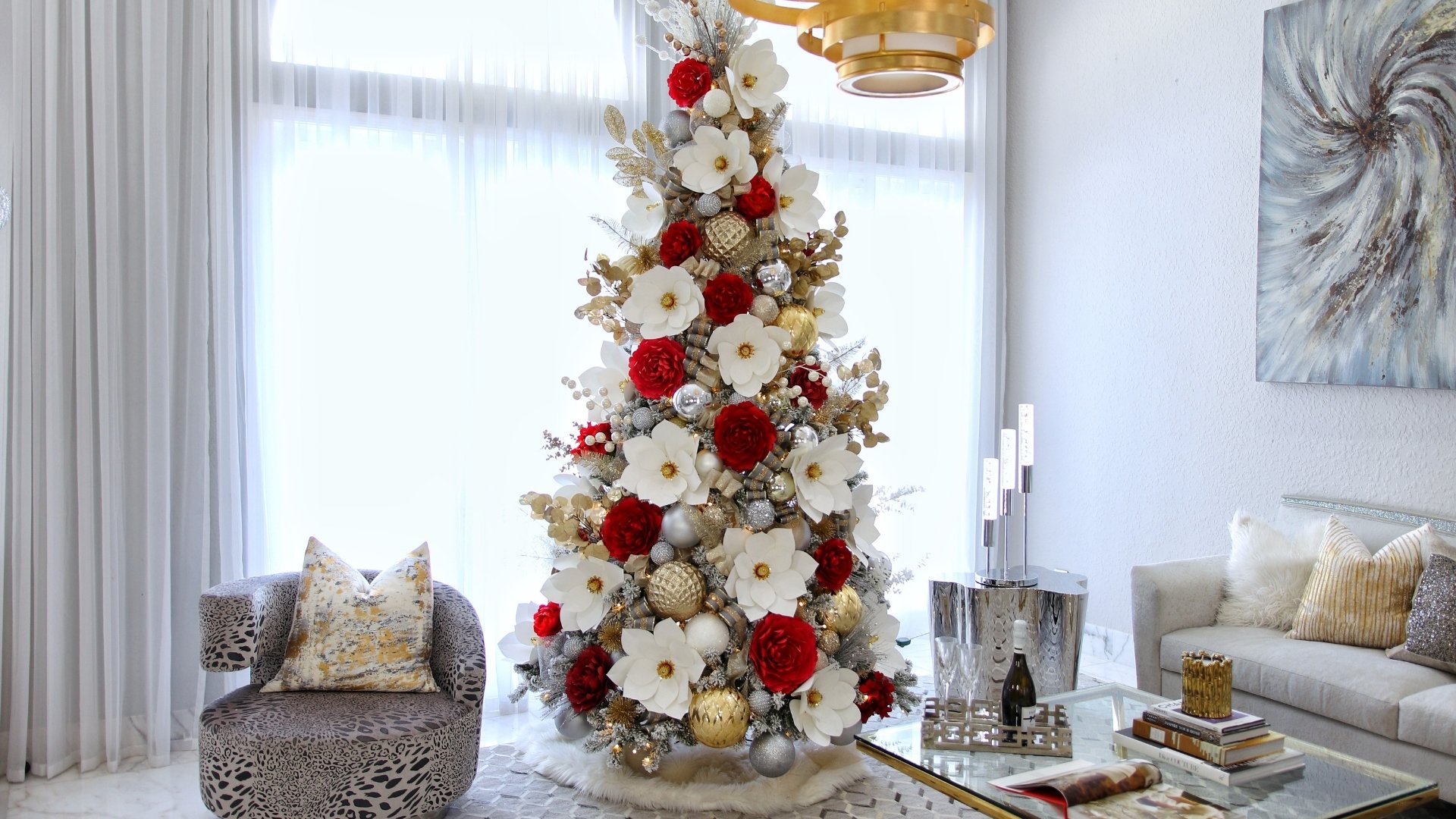 How To Decorate a Christmas Tree With Paper Flowers 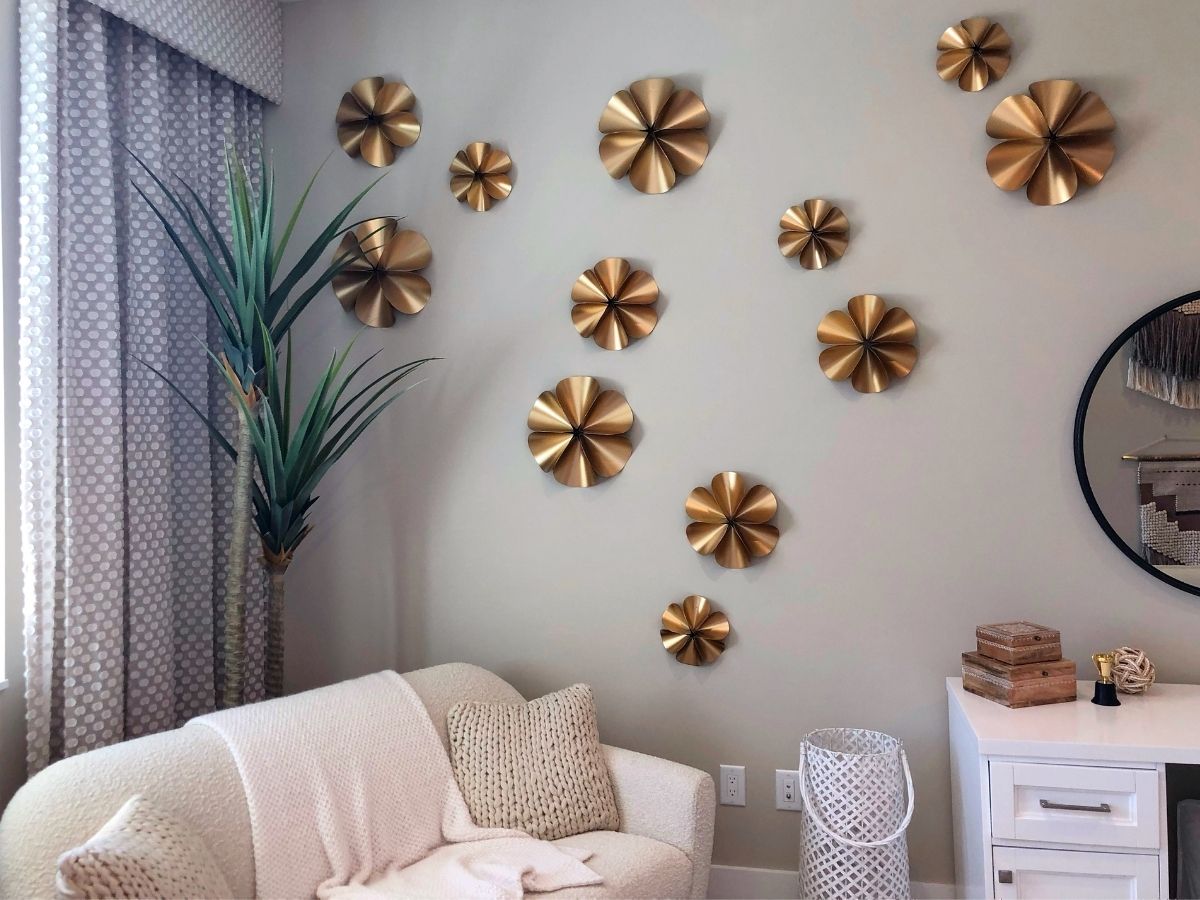 Check out my freebies to make beautiful paper flowers easy!

I would love to! 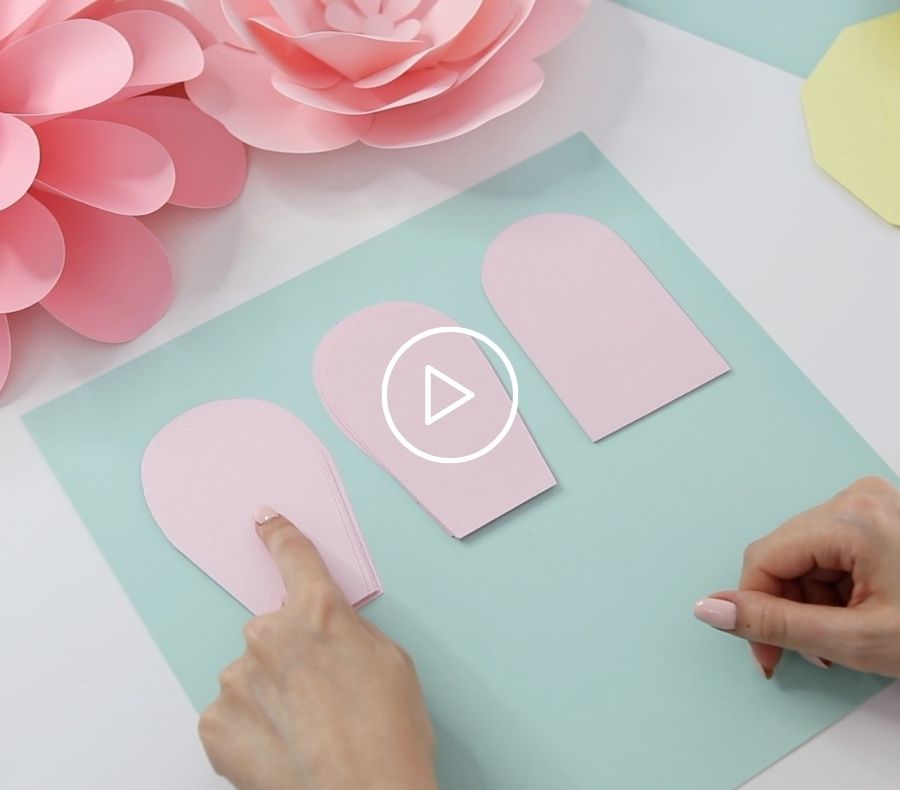 Level up your paper flower craft! 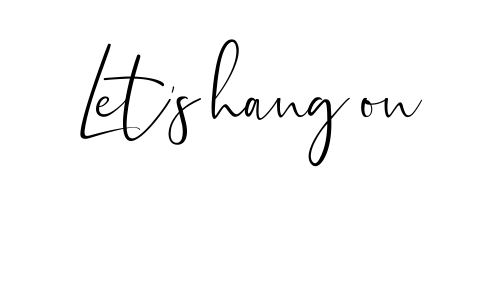